Professional umpires have been assigned to each game. Coaches should treat them with respect. With regard to on-field calls, the decision of the umpires shall be final.

All teams must submit an online roster, certificate of insurance, and waivers as directed by Game Day USA in pre-event correspondence. All teams must check in upon arrival to verify and approve their Official Roster and receive an information packet. Once a roster is verified, it is frozen for that weekends’ tournament. Teams cannot begin tournament play until their roster is submitted and verified. Teams who fail to submit a roster may be subject to a forfeit.

Game Day USA relies heavily on its proprietary Score Zone technology for allowing teams to get scores and standings from mobile phones and mobile devices. In the event of a technical failure (server, etc.) or human error (score keyed in incorrectly, etc.), the Tournament Director will work to correct the error as quickly as possible, and will post and/or communicate updated information. Teams should check back regularly in case changes are made that impact standings, seeds or brackets. In the unlikely event of a serious technology failure or outage, teams are required to send a representative to tournament headquarters for updates.

The home team for pool games shall be determined by a coin flip. The team that has traveled the greatest distance will call the flip. Either an umpire or a member of tournament management must be present for the flip. The higher seed based upon the original seeding will be the home team throughout the playoffs.

Teams should fill first and third base dugouts on a first come, first served basis, irrespective of home and away designation. If a team has back to back games on the same field, they should always remain in the same dugout, to avoid the extra time involved in moving bags, etc.

There will be no infield practice. Teams are allowed to play catch in the outfield area if the time allows. Never do flip drills into fences or step on foul lines.

Both teams shall report the final score to the Tournament Director or his/her designee immediately following each game. Since tiebreakers often come into play, accurate score reporting is critical. The event staff will provide scorecards to be turned in after each game. Teams who fail to turn in a scorecard within 4 hours from the conclusion of a game (or prior to the end of the last game of any given day) may be subject to the score turned in by the opposing team.

If a tiebreaker is needed to determine playoff teams (wildcards, etc.), the following tiebreakers shall be used:

The Tournament Director may modify the number or length of games when necessary due to weather, field conditions, or scheduling issues. This includes modifying the time limit if games get backed up.

Each team shall provide one (1) parent or volunteer to assist with scoreboard operation, etc. as needed.

All teams are required to adhere to local park policies and ordinances. Alcohol and/or tobacco shall not be brought into the confines of the tournament venues. The Head Coach shall be ultimately responsible and accountable for the conduct of his players, assistant coaches, and spectators.

15. A player may only be on one roster in any given tournament, regardless of age division.

16. While we encourage teams to have matching player uniforms, there is no penalty for players on a roster that participate with a different jersey and/or different numbers than listed on the roster.

17. Team rosters contain personal information such as player date of birth, email addresses and coach’s personal information. In the interest of protecting player and coach privacy, rosters can only be viewed by Game Day USA staff. Only a Head Coach may ask the Tournament Director about players listed and if they meet the age and/or roster qualifications. To protest a player’s eligibility, see the policy below.

18. Any Head Coach that would like to formally challenge the eligibility of a player shall make this known to the Tournament Director at least one (1) hour prior to the player’s next game. A $100 cash challenge fee should be posted at the time of the challenge. The purpose of the fee is to minimize unsubstantiated challenges. Provided this process is followed, the Tournament Director or his/her designee will investigate. If the player is ruled eligible, the $100 cash challenge fee shall be forfeited. In the instance of an age challenge, if the birth certificate cannot be produced before game time, the player in question is ineligible to play for that game. If the birth certificate shows the player is over age, the team must forfeit all games the player in question participated in. The forfeit score shall be 7-0 for tiebreaker purposes. If any player eligibility challenge is valid and upheld, the $100 cash challenge fee shall be promptly returned..

19. The birthday age cutoff is January 1. Each Head Coach shall have copies of player birth certificates on hand at every game, and shall be prepared to present them to the Tournament Director upon request.

The official playing rules for the tournament shall be the NFHS (National Federation High School) rules with the following exceptions:

Teams have the following three (3) options with regard to batting order and extra players:

DP/Flex Reminders
a) The DP can never play defense only.
b) The Flex can never be on offense only.
c) The DP and Flex can never play offense at the same time. If the Flex is going to play offense, they have it do it in the original DP’s position, therefore only one of them can play offense at a time.
d) The Flex and DP can play defense at the same time. The DP can play defense for any player other than the Flex and no one has left the game.
e) The player starting DP and starting Flex have one re-entry just as all players do. f) Once the game is started with the DP/Flex positions in the lineup, those positions are available for the entire game. Even if the starting DP or Flex has left the game a second time, the position is still available and an eligible substitute can enter the game as the DP or Flex.

The game start time shall begin with the first warm up pitch. The home plate umpire or base umpire shall monitor the official time, and it is preferred that the time be announced publicly to minimize confusion later. All games shall have a 1 hour and 15 minute time limit, except the championship game, which will have a 1 hour and 30 minute time limit.  Expiration of the time limit shall be ruled upon at the moment the final out in a half inning is recorded.

The Tournament Director reserves the right to modify time limits in the event of weather or scheduling issues.

24. Base Distances and Field Dimensions

The official bat must be ASA or USSSA certified by the manufacturer, and shall be no more than 34 inches long nor exceed 28 ounces in weight. The Official bat shall not be more than 2.250 inches in diameter at its barrel. Illegal Bat Penalty for All Ages: It is the responsibility of the Head Coach to insure the bats used by players meet the requirements of the Game Day USA published bat restrictions. A batter is in violation of the rule when said batter steps into the batter’s box with an illegal bat. An illegal bat must be pointed out to the umpire prior to the first pitch to the next batter, or before all defensive players leave fair territory. Penalty: The batter is out. All outs recorded during the time at bat count. Runner(s) will not be allowed to advance on a batted ball. If there are two (2) infractions by the same team during a game, the team’s Head Coach will be ejected.

The Wilson A9275 11-inch and the Wilson A9031 12-inch and the Rawlings C11RYSA 11-inch and C12RYSA 12-inch are the Official Softballs of Game Day USA. Game balls will be provided to start each game, but will not be replenished throughout the game. Teams are expected to assist in retrieval of foul balls and home run balls. Teams should always have tournament quality used softballs on hand to toss in if the original game balls are lost or not returned to umpires.

Metal spikes are not allowed in age groups 8U-12U. Likewise, metal spikes are generally prohibited for all ages on fields with synthetic turf. Any athlete that may play on a synthetic turf field must be prepared with non-metal footwear. Acceptable footwear in these cases includes turf shoes, plastic cleats, molded cleats, or gym shoes.

If a game is tied after the time limit expires or when the regulation innings have been completed, the following Game Day USA tiebreaker will be used. In the first extra-inning and every ½ inning thereafter, each team will start with a runner on second base and 1 out. The base runner will be the last batted out from the previous inning. Each batter will start with a 1-1 count. The game will continue in this format until a winner is determined. If a winner is not determined after three (3) extra innings, the game shall be recorded as a tie. Likewise, if weather or darkness prevents a tie game from being completed, then the game shall be recorded as a tie.

If a player becomes injured (as ruled by the umpire) and is unable to continue playing, her spot in the batting order shall be skipped with no penalty. Once an injured player leaves the batting order, she is done for the remainder of that game.

Game Day USA management emphasizes that the primary purpose of all tournament events is to create positive competition experiences and lifelong memories for the participants. All adults (coaches, parents, officials) should conduct themselves with this fundamental notion in mind. Comprising the integrity of the game or making a travesty of the game are unacceptable and will be grounds for disqualification.

33. Game Called Due to Weather or Field Conditions

If a game is not official as described above, the Tournament Director will either:
(a) Suspend the game and arrange to have it resumed where it left off, or
(b) Cancel the game such that it does not count toward tournament standings.

Should a championship game be interrupted by weather, darkness or unplayable field conditions, and is not an official game per the above rule, the championship team will be determined by the score at the end of the last full completed inning. If the score was tied at end of last completed inning or if the first inning of the game is not completed, the higher seed shall be named champion. 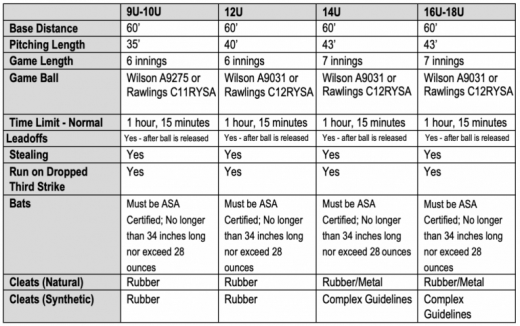 MVP Tags
Coaches will receive MVP tags for their games. Following each game, the Head Coach (or his designee Assistant Coach) shall award an MVP tag to the MVP of the game from the opposing team. This gesture will allow coaches to model good sporting behavior to their young athletes, and the round of applause from the spectators is intended to be a special moment for the players involved.

Nominate Your Best Platers:
Coaches can also nominate their best players for post-season All-Star Weekends. The nomination process is quick and easy online at GAMEDAYUSA.COM/ALLSTAR. Nominees will receive an automated email with an invitation to these special and prestigious events. In 2019, over 2,500 athletes participated in Game Day USA’s All-Star Program. 2020 events are expected to fill quickly, so coaches should nominate their best players immediately, and interested nominees should accept and enroll immediately. MVPs (described above) automatically qualify, and can enroll at GAMEDAYUSA.COM/ALLSTAR.

THANK YOU FOR PLAYING SOFTBALL WITH GAME DAY USA!